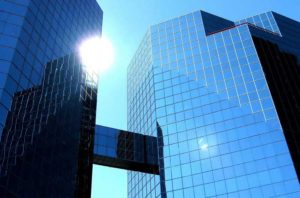 VIDEO ANALYSIS FOR SECURITY IN THE CITY

The combination of different Virabin analysis modules, form the best basis for advanced urban surveillance, for improving social order, punishing crime and protecting the lives and property of citizens. Because of their large geographic area, lots of cameras, equipment, and supplies, surveillance in the city calls for proper integration, stability, and reliability.

The feeling of safety of residents and the prestige of the city tend to increase, while investigations into vandalism can be done much faster.

Through the use of CCTV and various Virabin analysis modules, the security forces are able to improve the safety of the city non-intrusively using the latest technology.

All our modules are able to perform their analysis not only in real time but via video recording or video push from your mobile phone. It will be possible to perform analysis of the video recorded at the scene of a crime, detecting and recognizing license plates of vehicles that are at the scene. Our advanced technology allows any agent to make a recording from their phone, upload it to VMS and perform the analysis on this video.

With video analysis platform of Virabin, you can view the settings of their analytics, pause it and resume it when it suits you. At any time you can decide which set of cameras will make a concrete analysis and establish unlimited analysis scenarios that could be used in the most consistent way with a given situation. All this through a single setting.

Virabin Stopped Vehicle detects any vehicle parked illegally or in a certain area for too long, including in regular traffic areas where vehicles can hinder circulation. It is able to recognize vehicles parked for less than a minute, but the most important aspect is that it can detect vehicles stopped for more substantial periods of time. A limited-term for the parking area is predetermined by the user and any vehicle that is parked in the area for too long will raise an alarm.

Virabin Measuring Speed and Wrong Way allow us to detect reckless and potentially dangerous driving and act quickly on violators of traffic rules, preventing possible accidents. If a vehicle is traveling in reverse or in the wrong direction, the system monitors it and alerts security staff in real-time. In addition, you can set a speed limit in an area, and send an alert (and record) when anyone exceeds this limit.

By using our Counting Vehicles module, cars driving on a roadway may be counted, allowing monitoring of the level of traffic in an area thus allowing bottlenecks at peak times to be prevented.

Thanks to Virabin LPR module, we recognize not only the registration of any vehicle that is registered in a database (stolen vehicles, VIP, etc.), but we can track them throughout the city, provided that there are sufficient cameras. 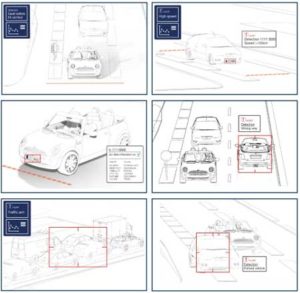 PEOPLE COUNTING AND OCCUPANCY RATES IN AN AREA

In many cases, public spaces in cities such as squares, parks, and intersections are massively busy at peak times of the day. Thanks to our analytic Occupancy Rate, police or security agencies can know the occupancy rate of these places.

Thanks to our Occupancy Rate analytic, the security agencies and managers will learn the occupancy rate of these places.

Furthermore, our hot spot detection analytic, Virabin Heat Map, recognizes areas with the greatest and most continuous flow of people, providing detailed statistics so that the center management can adopt security measures that it considers necessary. You can count the number of people in a given area, using the analysis Module People Counting. 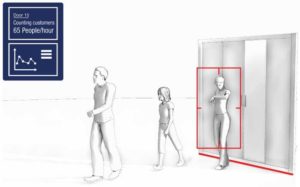 As we have previously stated, through our analytic Occupancy Rate, we can determine the rate of occupancy of the areas that we want within the bank. This rate can sometimes be dangerously high, so that bank management needs to implement additional security measures.

Any time there are such large crowds of people, our analytic Panic, recognizes patterns that lead individuals from nervousness to panic and thus prevents potentially dangerous situations. It is necessary for the management of public service establishments to ensure the physical security of their users, so they do not suffer any accident and have the means to respond as quickly as possible if this occurs. Our person Fall detection analytic helps to recognize when someone has had an accident, fallen to the ground and was not able to get up within a certain time. 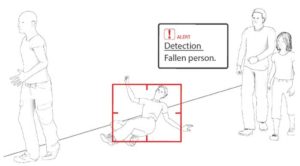 A good example is the recognition of objects that do not move at airports. In these times when everyone is rushing, many people forget their belongings in public places. This puts your property at risk and maybe even the people around it. Therefore it is important to remove it as quickly as possible.

To help with this task, Virabin offers its analysis module Lost Object Detection, which allows the video surveillance system to detect these objects and act accordingly.

Virabin Business Intelligence Analytics is a modern solution in the field of providing security and marketing that they will improve the control and management of your company and business.

On a security level, Virabin provides more than 45 different analytics modules from face, objects and plate recognitions to counting, traffic analytics, amongst many others, in order to prevent any unlucky event that may happen.

On a marketing level, Virabin Analytics Platform will offer the possibility to recognize any of your customers and create your own reports through statistics and the most advanced Business Intelligence and Big Data tools to implement the most advanced marketing strategies focused on the client in the most direct way.

Our suggested software nowadays is a famous brand in the field of offering a smart solution which is presenting different kinds of services in video analytics section.